The Food Lab is an experimental culinary arts center that fuses the industrial history of the building with a modern twist of molecular gastronomy. Entering patrons will challenge their senses scientifically through the texture (technical), form (social), and aesthetic (artistic)* not only in the design of The Food Lab but also an experimental dining experience in contemporary steampunk.
*molecular gastronomy is widely recognized to have three components: technical, social, and artistic.
***
THE CHALLENGE
To repurpose a historic building to meet its new needs and functions of the space by celebrating its industrial history while blending into the upcoming development of the area.
Adaptive Reuse |September 2020 - December 2020

SITE: 1001 West Seneca Street
More popularly known as the Sign Works Building, the complex is a footprint of the social, political, and historical changes in the area especially as part of the waterfront at the Finger Lakes. Beginning as a boatyard and then a piano factory to the Sign Works building, the building still stands highly recognizable with its ghost signs on its facade and location right off Seneca Street, one of the most historic streets of Ithaca. In addition to the many historical uses in the building, the site was also the intersection of the railroad that once crossed through Ithaca. This railroad made it possible for Ithaca to be a part of the industrial network of the Northeast United States by making Ithaca a main stopping point and manufacturing hub.
1001 West Seneca Street has many historic elements embedded within the building inside out that are worth commemorating as existing architectural elements that embody historic value. These particular elements are emphasized in the redesign of the building.
Arched Windows
These tall vertical windows with segmented arches and window hood ornamentation represent an industrial version of an Italianate style.
Brick Facade with “Ghost” Signs
This area where the railroad once crossed the inlet was an industrial center of the city for transportation and of the few buildings remaining from this historical period, this rectangular building is the most visible one with the painted lettering still apparent.
Exterior pipes and exposed interior ceiling
There are exterior downspouts, made of galvanized steel on the exterior. These exposed pipes can also be seen in the interior exposed ceiling.
Wood/Steel Columns
These large wooden chamfered columns were common in 19th Century industrial buildings with steel braces at the top of the column, secured using bolts. Prior to steel columns, these columns display a strong contrast of structural materials.

DESIGN INTENT
The design intent is to bring a new form of sustainable and educational activity to the west end, achieving its broader goals of the waterfront development of sustainability, equity, and collaboration. Local food and agriculture in Ithaca has been widely celebrated in the past and especially now having evolved over time in the foodservice management and hospitality sector. A more modern, scientific, and innovative approach to food can not only meet the market demand, but also reminisce the hands-on and collaborative cultural history of the Sign Works building.
INDUSTRIAL X MOLECULAR GASTRONOMY = STEAMPUNK
Steampunk is “a retrofuturistic subgenre of science fiction or science fantasy that incorporates technology and aesthetic designs inspired by 19th-century industrial steam-powered machinery.” Often set in Victorian England or America’s Wild
West, steampunk originated in the 1980s as an “alternative Industrial Revolution,“ reimagining modern technology as “elaborate works of art, fashion, and mechanics.”
The building’s railroad history had made Ithaca a main stopping point as well as a manufacturing hub. This industrial history in the Northeast United States, along with such revolutionary changes witnessed in the three story brick building, should be celebrated in the design process and steampunk is one that can connect the two.
Similarly, molecular gastronomy is a relatively new discipline that combines the technical, artistic, and social - all that the building embodies as well. The experimental cuisine brings culinary surprises to the table through food science, a field that is unfamiliar to the area and can promote a more sustainable and engaging community at the waterfront (Plan Ithaca). These scientific and mystifying properties of molecular gastronomy make steampunk the ideal medium to connect the building to its new proposed use as an experimental culinary arts center.

FROM ATOM TO TABLE
Given Ithaca's local culture, it is no question that the city is full of farm to table restaurants. Sourcing locally is not only sustainable but it also brings the community together by celebrating the rich agricultural production on site.
Similarly, molecular gastronomy is the science of cooking, specifically exploring the physical and chemical transformations that occur during the cooking process. This discipline has been growing for the past two decades to explore both the limitations as well as endless possibilities of food, to the atom. This new culinary experience, when combined with steampunk, breathes air into the industrial building conveniently located in Ithaca, New York. 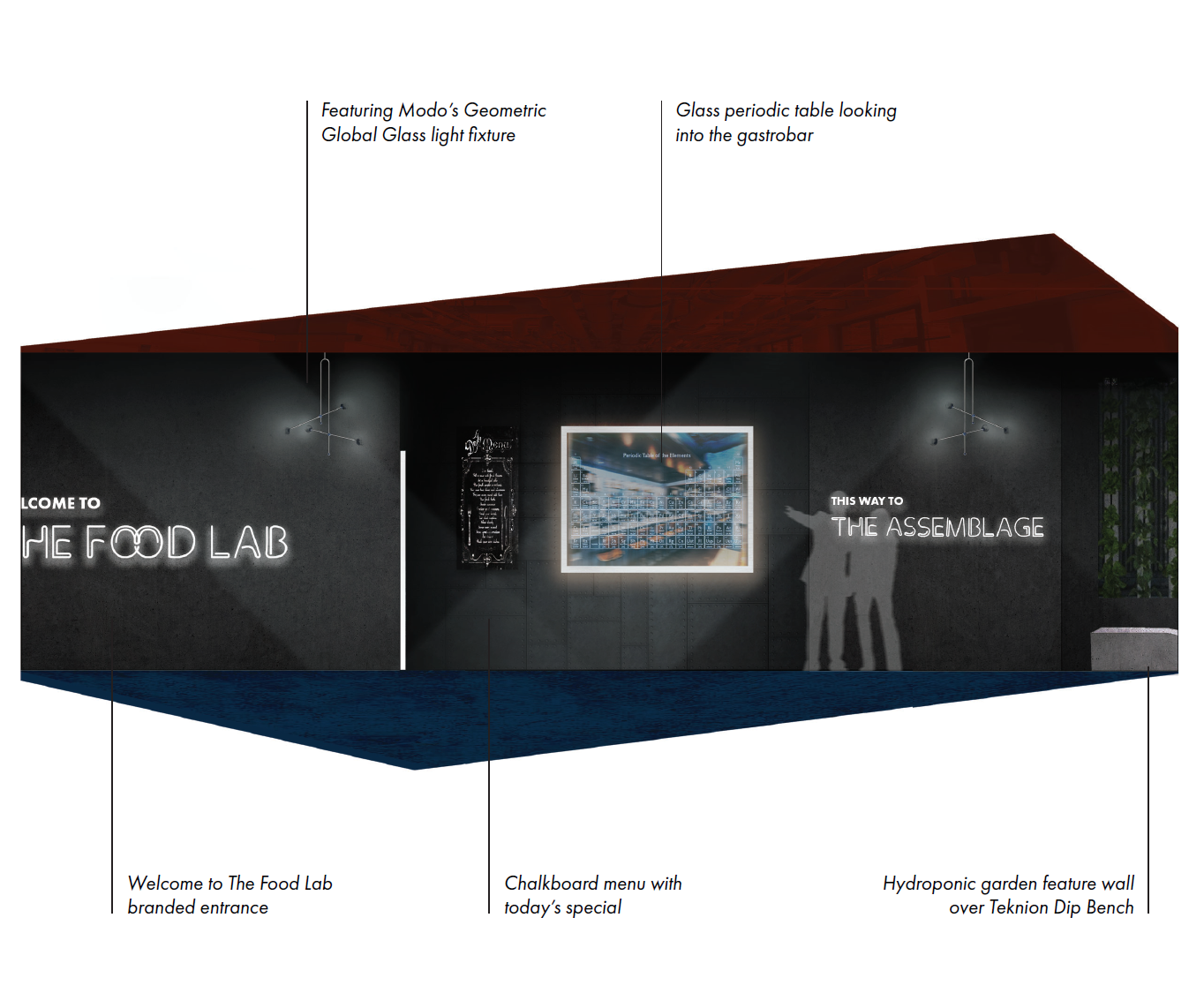 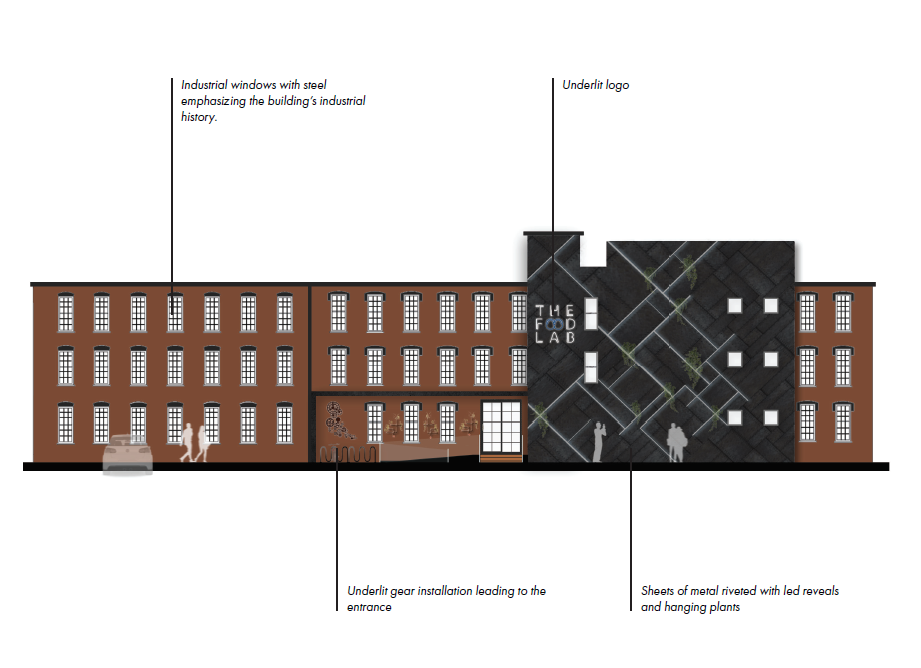 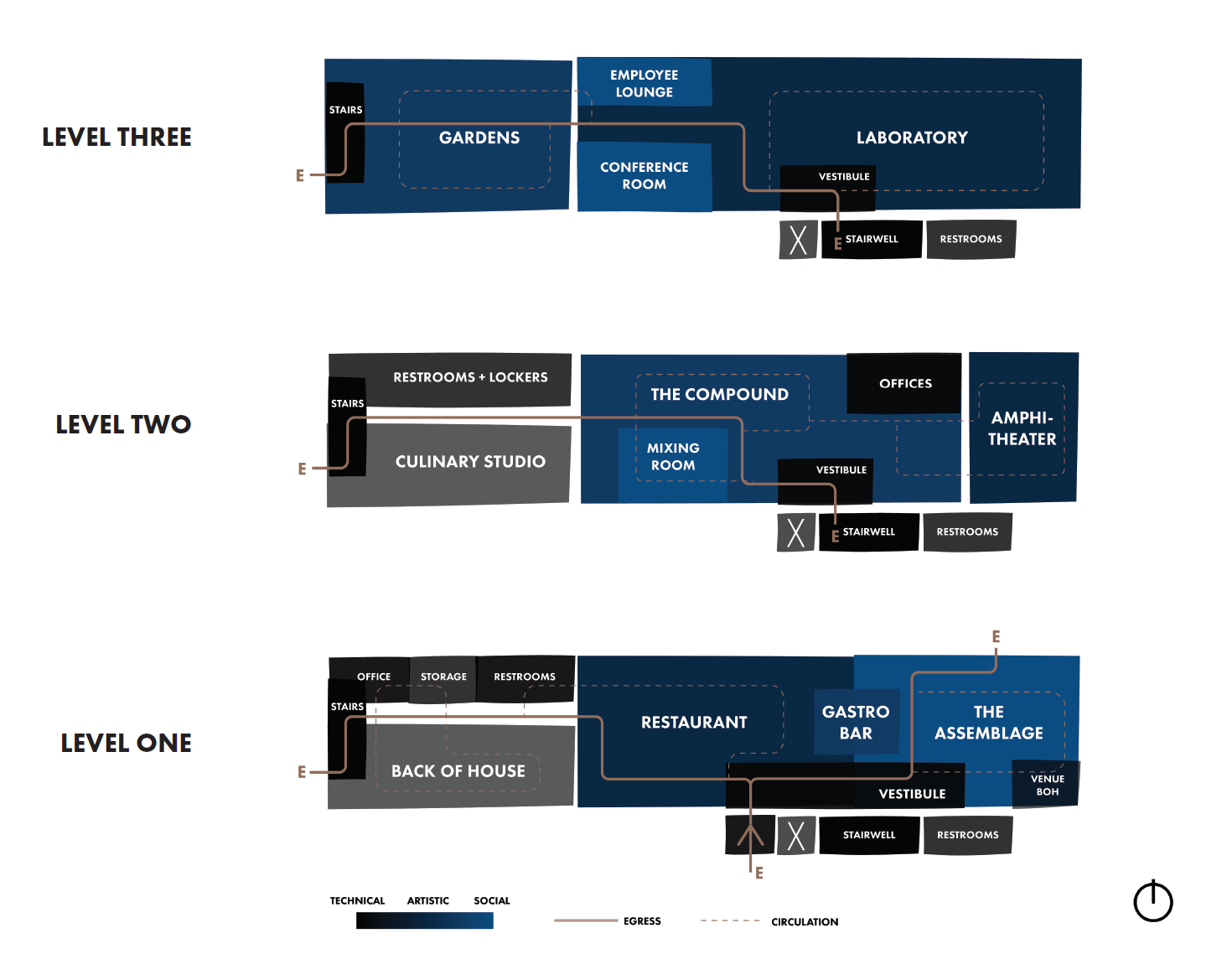 LEVEL ONE
The restaurant, THE FOOD LAB, is an experimental cuisine focused on the dining experience. With a prix fixe menu for the night, the restaurant tailors their menu to specific themes for the night, frequently mixing in steampunk with its more modern molecular gastronomy dishes. Patrons will experience the full journey from atom to table in their select courses in contemporary steampunk with a gastrobar for an alcoholic take.
The venue space, THE ASSEMBLAGE, is not only a reservation space, but also a private dining experience. The space features a chef’s table, designed to interact with guests as they fill the room with a relaxed gastrobar. This experience is appointment only, best for those who want to take a closer look at the science behind food. 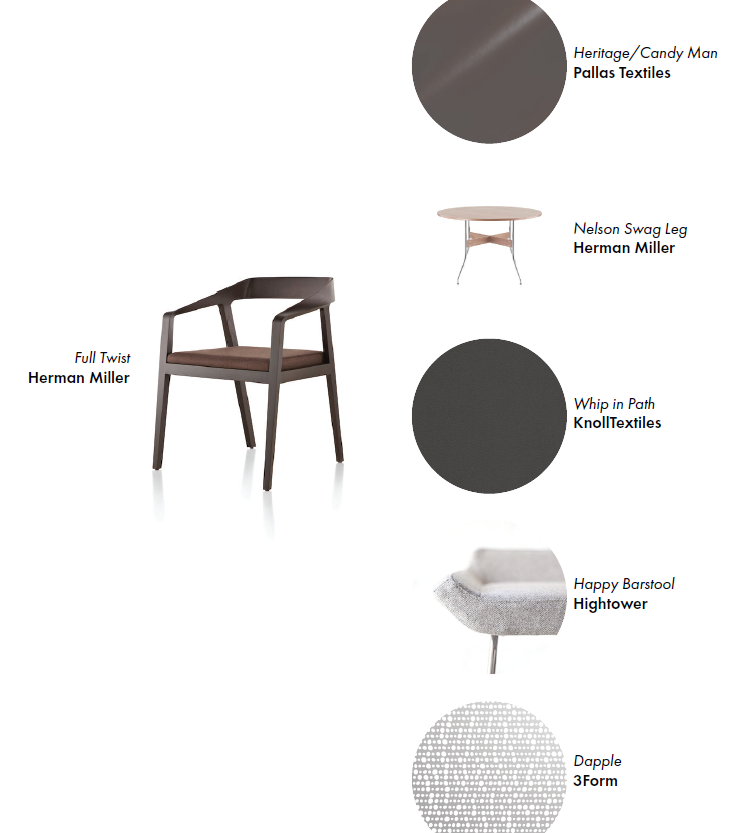 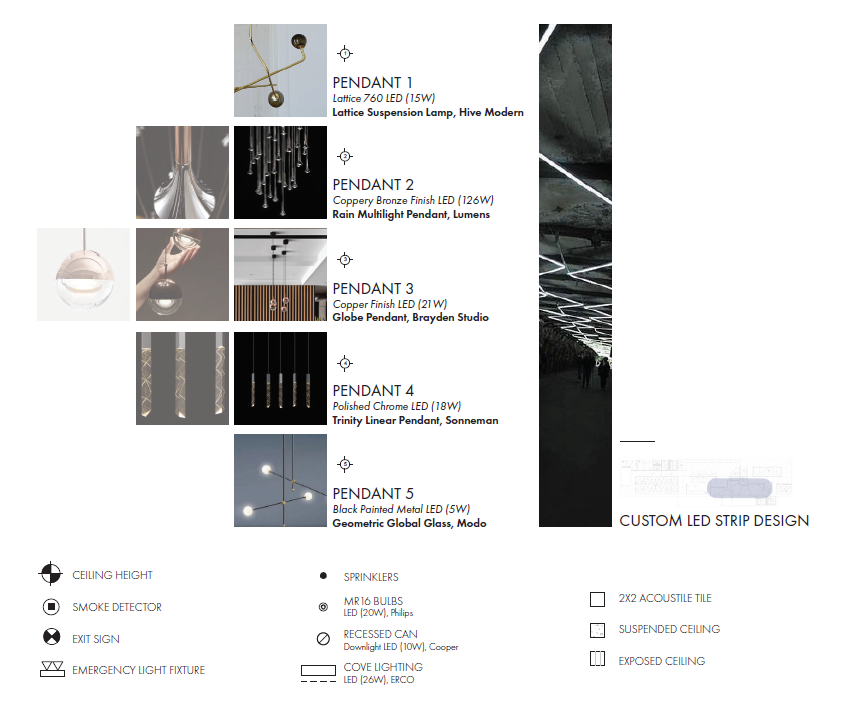 LEVEL TWO
Compound, often known as the union of separate elements in chemistry, also means putting together to form a whole. THE COMPOUND is the primary learning space for students who are passionate about the study of molecular gastronomy to come together and collaborate. This institute offers an amphitheater, lounge, culinary studio, and mixing room. In this study, students can also hold an establishment at The Assemblage, where professional guests are invited through collaborations to further connect the intersection between molecular gastronomy with the local Ithaca Community. 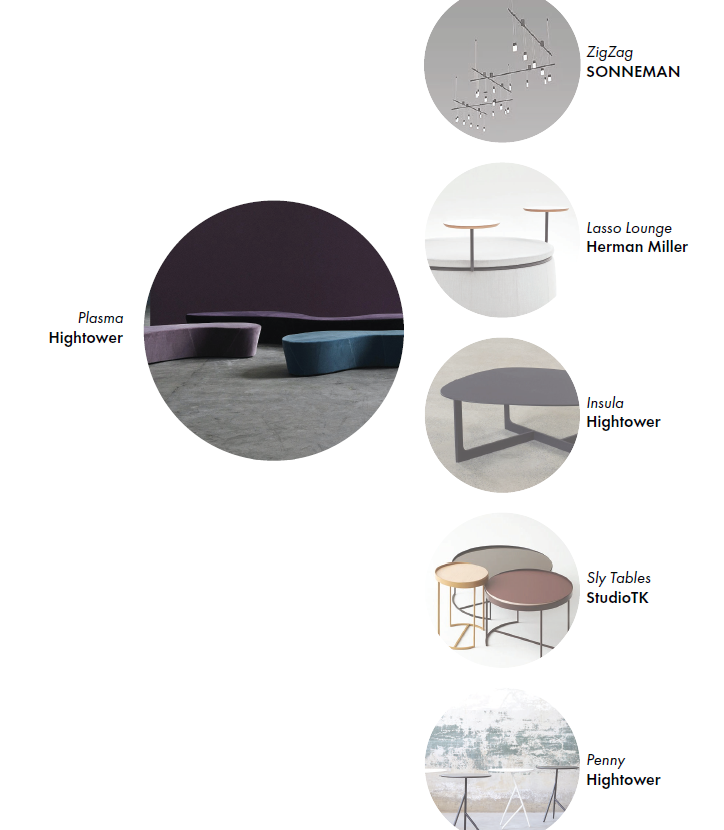 LEVEL THREE
The most revolutionary changes come from research. As a facility who seeks to put themselves at the forefront of experimental dining experiences, THE LABORATORY and HYDROPONIC GARDENS on the third floor represent the nucleus of the complex. Hydroponic gardens on the top floor with skylights breathe fresh air into the historic building while the adjacent laboratory allows students to take on a research role in molecular gastronomy. Growing from scratch on the third floor, learning the limitations as well as endless possibilities of food on the second floor, and engaging in a sensory dining experience on the first floor is the level by level mission of The Food Lab. 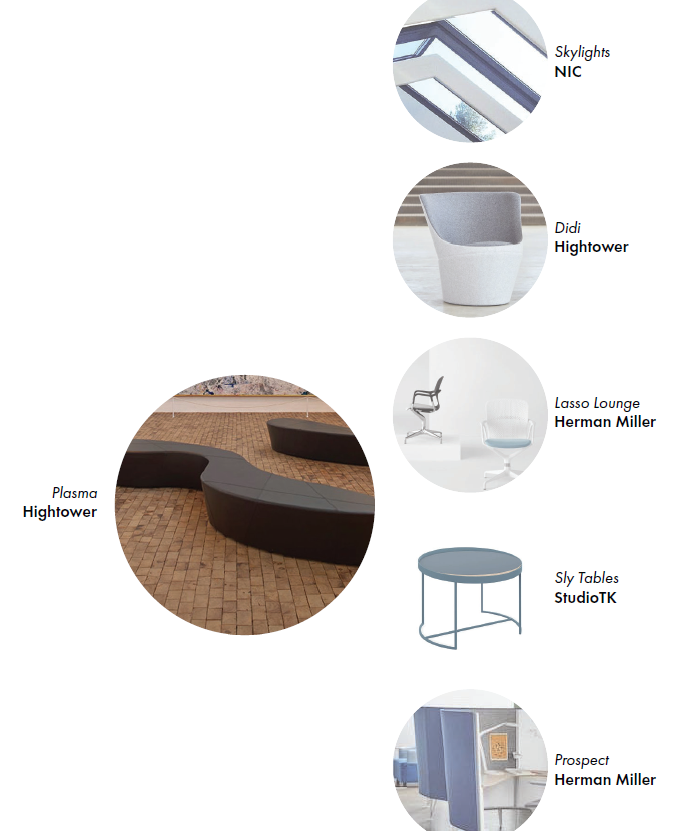 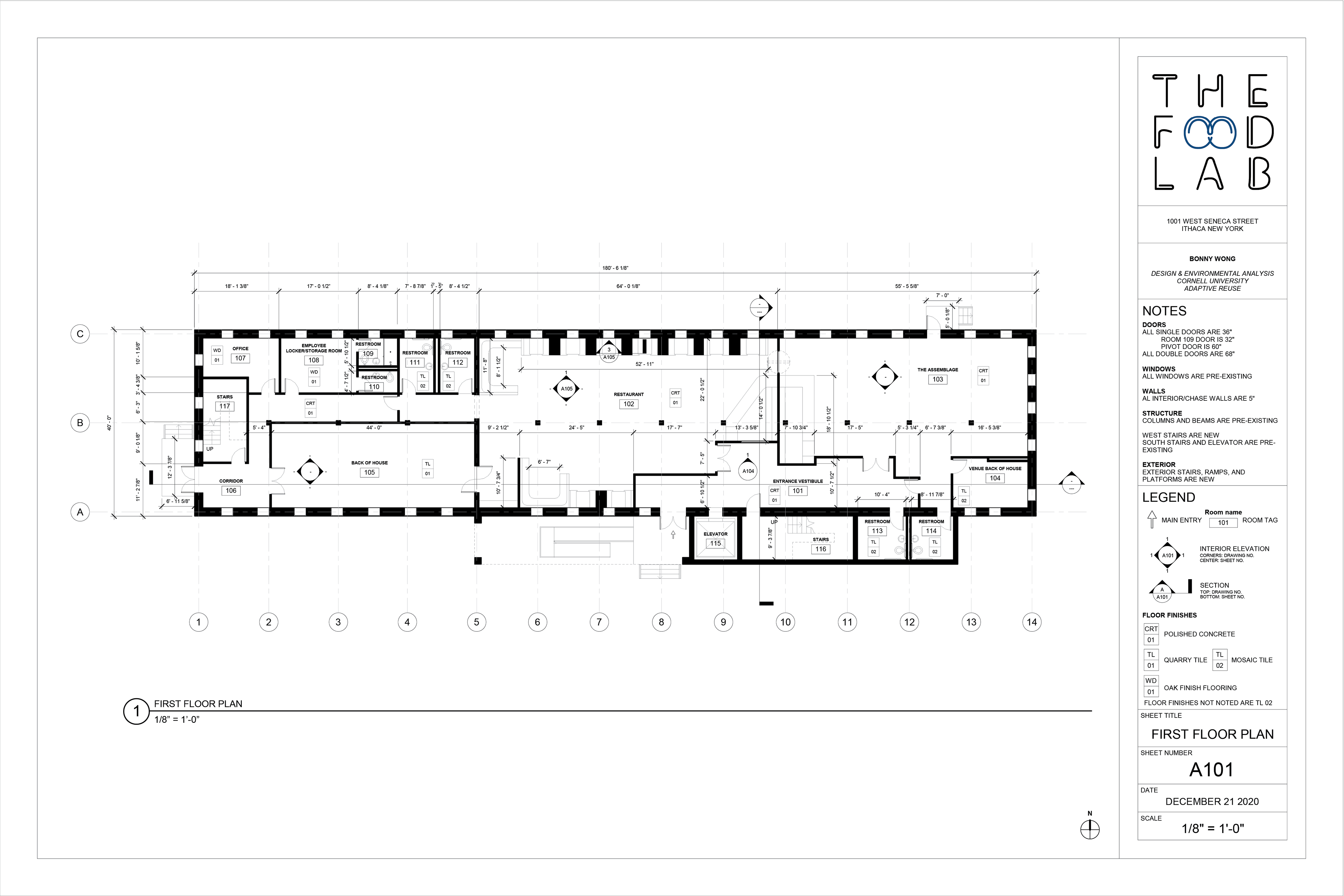 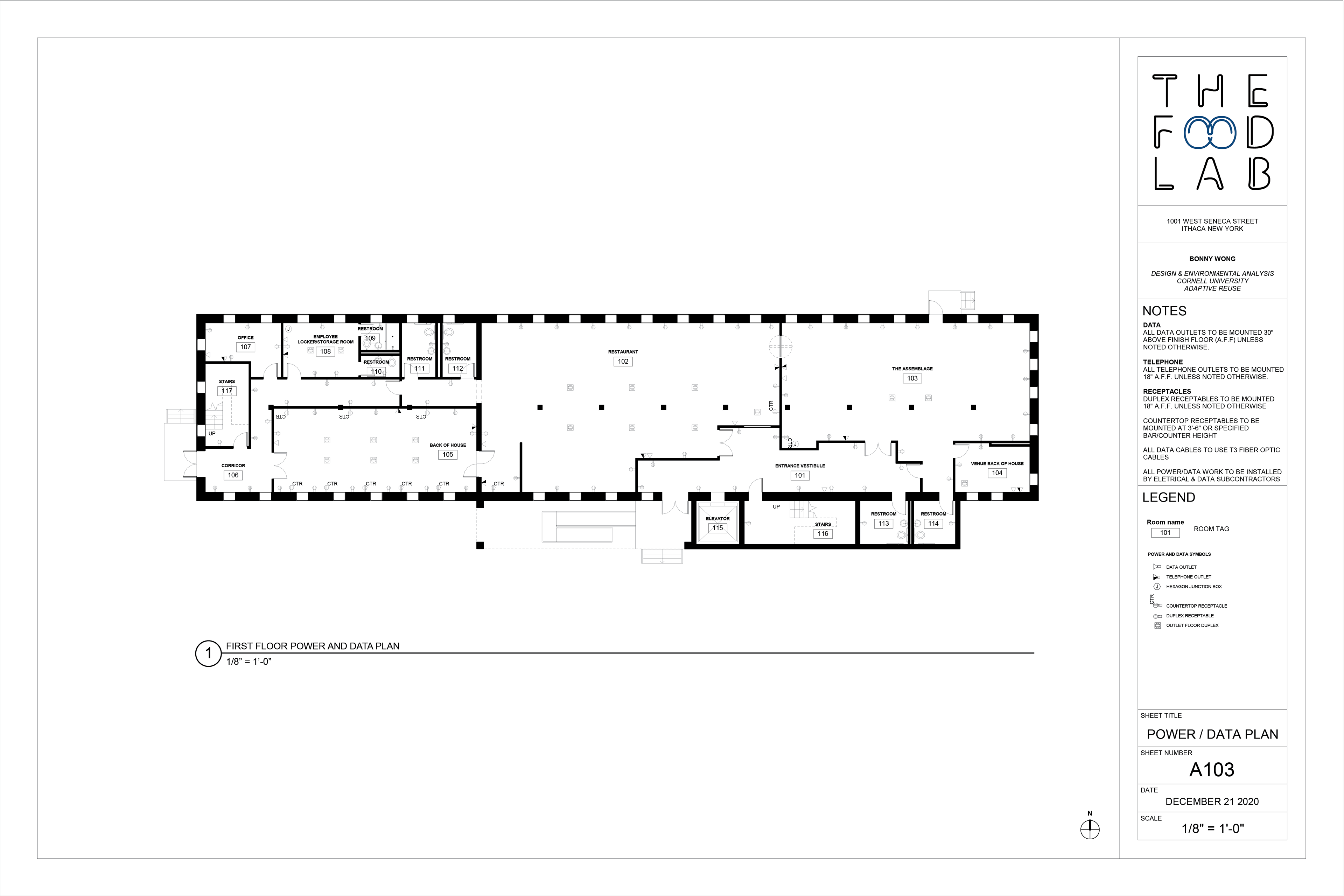 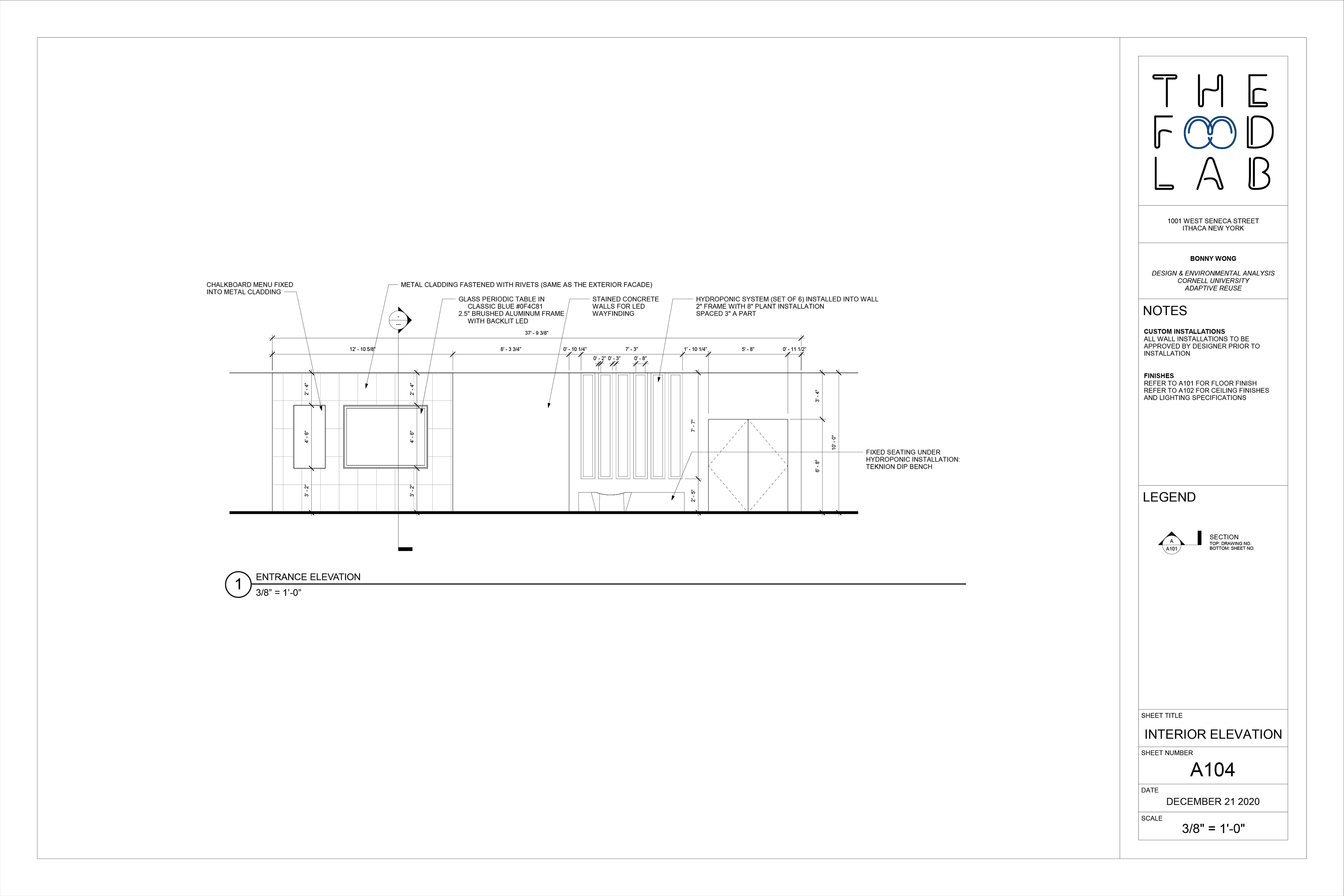 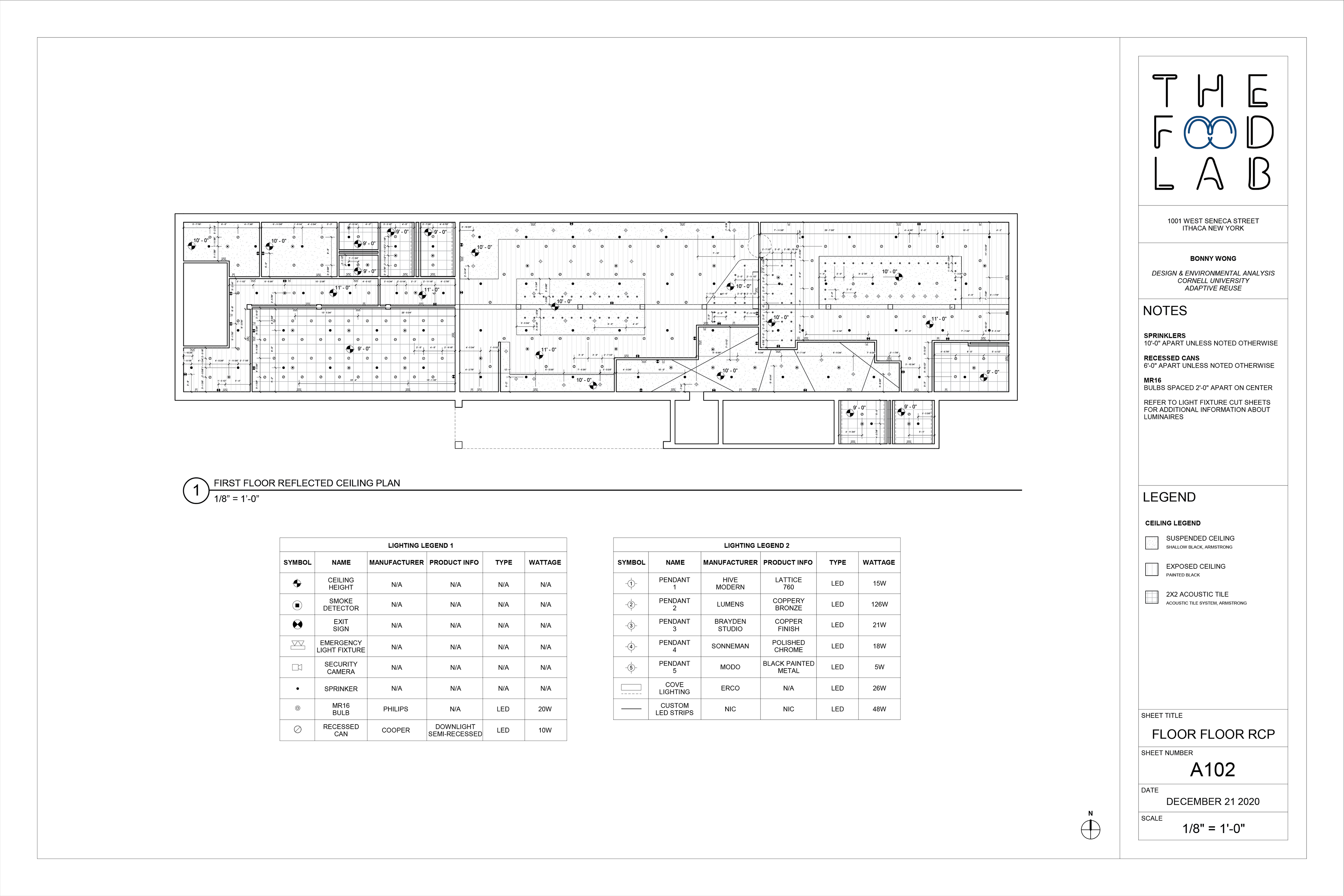 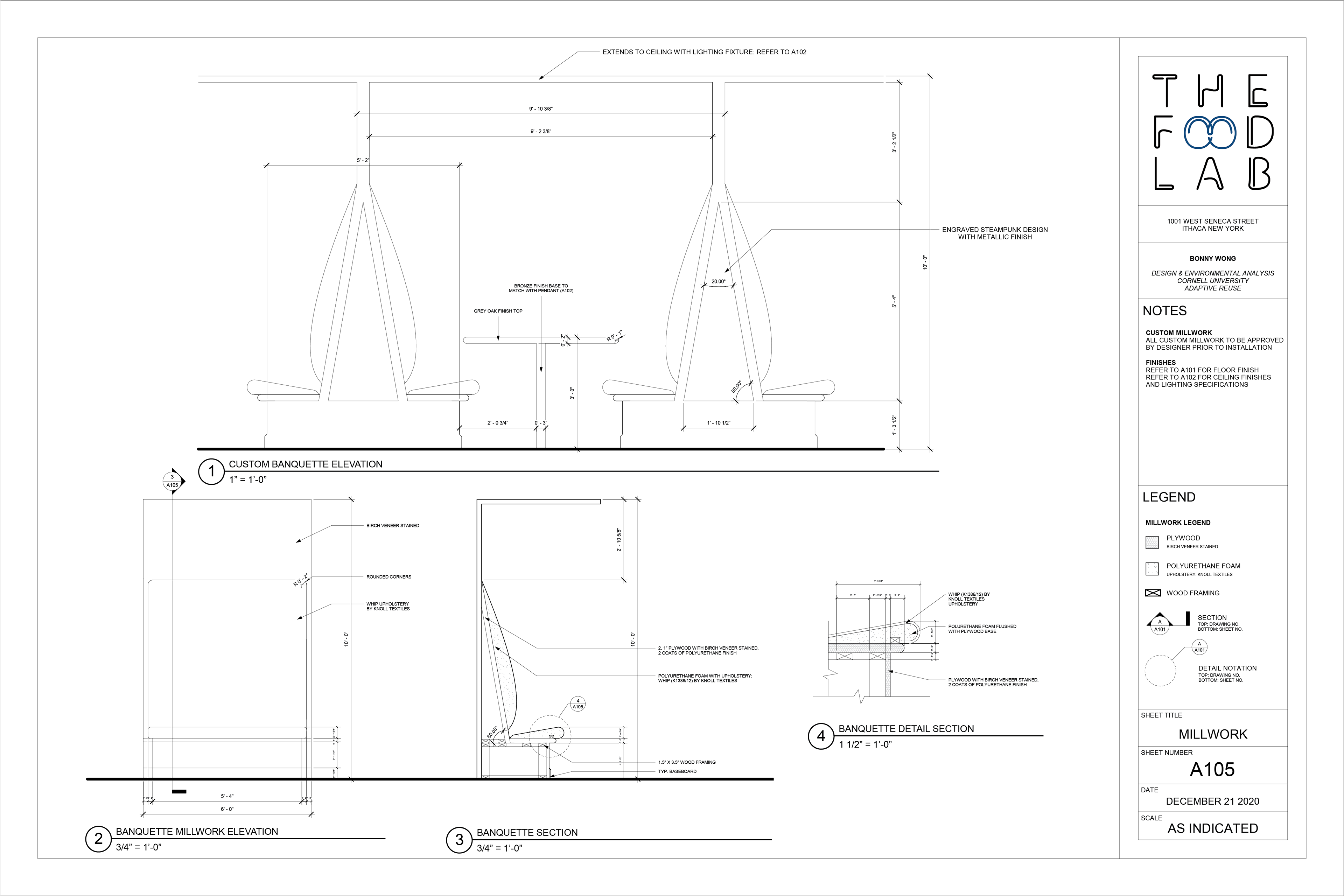 NORRIE FLOW
↑Back to Top